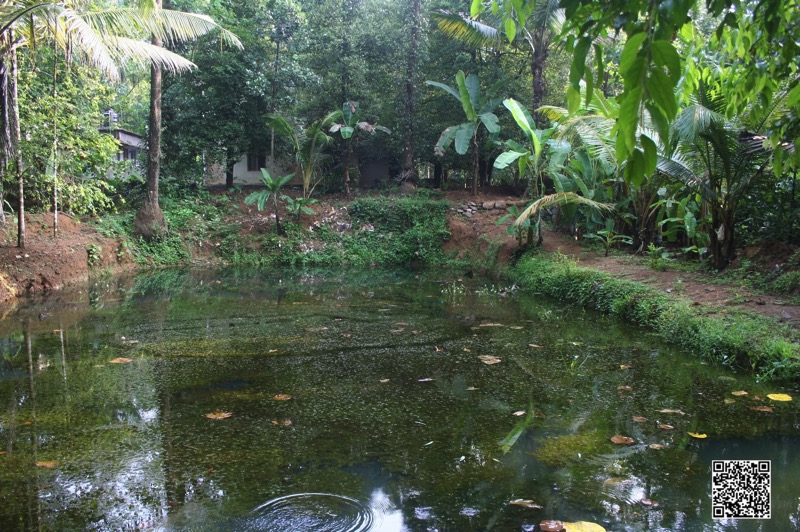 Thuppanchira, the name is new to me even though the pond was there, just behind my home, for the last 15 years after we built our house in 1998. The pond was there for more than a 100 years before we moved to this house. The only change that happened to the pond in the last 50 or so years is that it has shrunk considerably.  The paddy fields around the pond are now filled and converted for vegetable cultivation.

It is difficult to locate the pond on Google Maps because of the trees surrounding it. We now face two types of threats, one to the pond as a water body and the second caused by the pond to the nearby plots.

Years ago there was a small canal and a path adjacent to it from the nearby Puthumana Road to this pond through the paddy fields. This path is no more. Half of the pond is illegally encroached by people with political “connections”. Recent purchases of near by plots by people with similar connections pose a new threat to the existence of the pond.

The pond, not maintained properly, is a breeding ground for mosquitoes. Soil erosion and land slide to the pond is another threat to the nearby house. Efforts to Revive the Pond:

While efforts were going on at various levels to identify the pubic land and to reclaim the encroachments, nothing much happened here because of the political connections of encroachers. Online complaints to “Kerala Jalanidhi” went unnoticed.

The only known effort to revive the pond happened in 2013-14 under the leadership of Mr. Tharian, Member of Ward 4, Manjapra Panchayat. A flex board erected near the pond quotes an expense of INR 31,626 to clean the pond through the Mahatma Gandhi National Rural Employment Guarantee Scheme (MGNREGS).